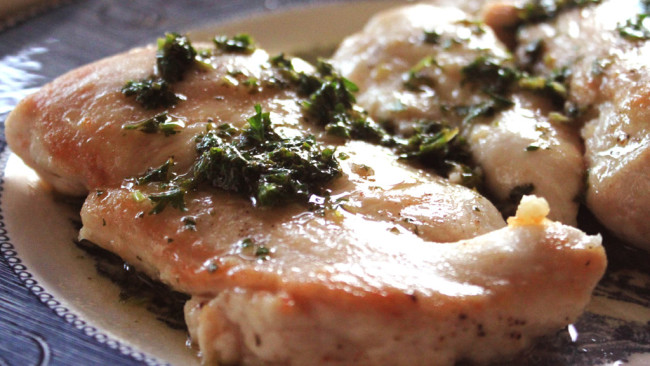 Chicken breasts are lightly dusted with flour and are sauteed in clarified butter. Ordinary butter will burn and form black specks on the supremes (chicken breasts). Clarified butter may be heated to a higher temperature before burning.

Just before sauteing, sprinkle the supremes with salt and pepper, (I sprinkle with a little garlic powder as well) roll them in the flour, and shake off the excess flour.

Clarified Butter: When ordinary butter is heated until it liquifies; a milky residue sinks to the bottom of the saucepan. The clear yellow liquid above it is clarified. The milky particles are the ones that burn first, so removing them allows the clarified butter to be heated to a higher temperature. To clarify, cut butter into pieces and place it in a saucepan over moderate heat. When the butter has melted, skim off the foam, and strain the clear yellow liquid into a bowl, leaving the milky residue in the bottom of the pan. See the milky residue? Now you have clarified butter. The residue may be stirred into soups and sauces to serve as an enrichment.

Pour clarified butter into skillet to a depth of about 1/16″. Set over moderately high heat. When the butter begins to deepen in color very slightly, put in the supremes.

Regulate heat so butter is always hot but does not turn more than a deep yellow. After 3 minutes, turn the supremes and saute on the other side.

In two minutes, press tops of the supremes with your finger. As soon as they are springy to the touch, they are done. Remove to a hot platter leaving butter in skillet.

Add the 4 tablespoons of additional clarified butter to the skillet and set over moderately high heat until the butter has turned a very light golden brown (a minute or two). Immediately remove from heat, stir in parsley and lemon juice, and taste for seasoning. Pour over the supremes and serve.

This work is licensed under a Creative Commons
Attribution-ShareAlike 3.0 United States License.